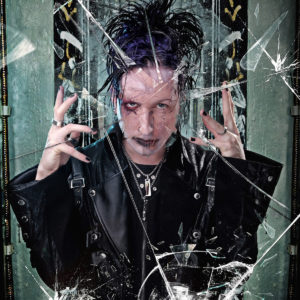 Shock Illusionist Dan Sperry : The Anti-Conjuror is hailed as the most popular and in-demand illusionist of this generation. As a result of his jaw-dropping performances on multiple record-breaking international tours, numerous network television appearances, and some of the most underground viral videos to ever plague the Internet, his legion of hundreds of thousands of dedicated fans span all ages and demographics.

Combining the art of magic with the macabre, his totally unique and edgy illusions initially capture the imagination of crowds across the globe. But it is his unhinged, shockingly eccentric humor and audience interaction that makes his live show a truly unique experience that has been dubbed, “Totally icky, yet totally awesome”, “…Left me laughing to tears. The cynical Alice Cooper of Magic”, and one that “Has audiences laughing and shuddering in equal measure”.

From starring in the best-selling magic show in Broadway history The Illusionists, sky-rocketing ratings on America’s Got Talent, Germany’s hit series Das SuperTalent, FOX’s World Magic Awards, and TLC’s Cake Boss, to selling out countless performance venues around the world, Dan Sperry presents a magic show for people who love magic shows but an even better show for people who hate magic shows. 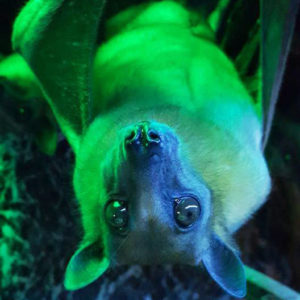 For over 20 years, a dark shadow has been educating the people of NJ and the Tri-state area on the importance of nature’s most maligned and misunderstood mammal, the bat. And now, NJ’s bat-man is bringing his family friendly LIVE bat exhibit once again to DSOTC.
Joseph D’Angeli is a State and Federally licensed bat specialist, educator and exhibitor. He and his bats have appeared at THOUSANDS of schools, libraries, zoos and nature centers since 1992. His beautiful bats have also appeared in numerous TV shows and periodicals- including the NY Times, Daily News, Star Ledger, Regis and Kathy Lee, and more recently, History Channel’s ‘Monsterquest’ and the Science Channel’s Oddities shows. Joseph and his bats have just returned from their first ever appearance at NYC’s prestigious American Museum of Natural History.
Mr. D’Angeli’s “Bat-Cave”, The Wildlife Conservation and Education Center is the only facility specializing in, and centering on, bats and bat conservation in the NY/NJ area. The Center has also become a permanent home for unwanted, abandoned, and confiscated exotic animals. Reptiles, small animals, giant tarantulas and many others have found a forever home at the center.
Mr. D’Angeli and his staff have also been involved with raising awareness, as well as funds, for research into finding a cure for White Nose Syndrome, a disease that has been killing off U.S. bats in record numbers since its discovery in 2006.
For more information, please go to www.njbatman.com or www.thebatcave.org or call 201-257-2231.
The Wildlife Conservation and Education Center:
303 Midland Avenue, Garfield NJ 07026. 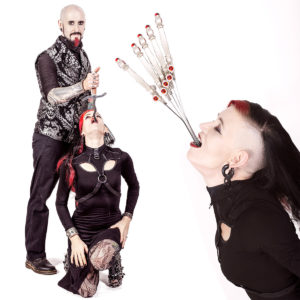 Stray cat sideshow: Dubbed America’s creepiest sideshow couple. Come one come all to see the darkest and strangest acts that this duo has pulled out the shadows from around the world.
You will never be the same after You witness the morbid beauty of the world’s most daring female sword swallower, Secoria DeKitten and the twisted tales of misfortune and triumph from Robin Souls.Strap in because it is time to take one strange journey.

As seen with Ripley’s Belive it or not, Oddities and Curriosities expo, Museum of the Weird, and many more! 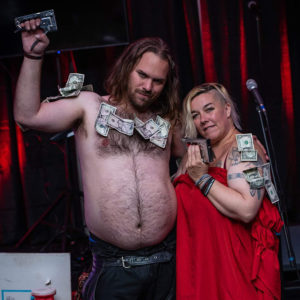 Founded in 2011 and featured in both Weird NJ magazine and The Star Ledger, Karnevil is New Jerseys premiere carnival sideshow experience and is touted globally as “The worlds most dangerous sideshow!” Whether bringing you death defying escapes, astounding acts of skill, classic sideshow fare, ridiculous games, or informative presentations on macabre Victorian subject matter, the Karnevil Krew delivers above and beyond any mortal expectations! 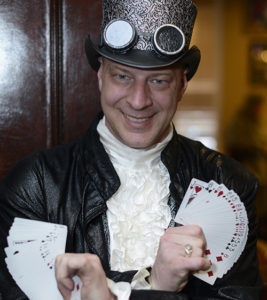 Jeffrey Jene has been performing magic for almost three decades. Starting out as a stand-up comic, Jeffrey was inspired by the sleight of hand of a fellow performer and decided that he would learn all he could about the art of magic. Jeffrey specialized in difficult forms of sleight of hand and object manipulations, and later added large stage illusions to his repertoire. His efforts paid off when he won the Houdini Convention trophies for best close up and stage magician two years in a row. Today Jeffrey is considered by his clients and peers to be one of the finest sleight of hand magicians in the country. He currently lives in Upstate New York, where he continues to develop and present his astonishing miracles. 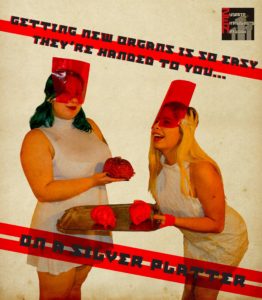 Zen Productions
[Long Island]
ZEN performs live stage plays, shadow casts of Repo! the Genetic Opera, Little Shop of Horrors, The Nightmare Before Christmas, and Doctor Horrible’s Singalong Blog. The Zen Room, a subsidiary of ZEN Productions, is Long Island’s premiere shadow cast for The Rocky Horror Picture Show. The ZEN Room regularly performs throughout Nassau and Suffolk counties, including their annual Halloween show at the 1200-seat Patchogue Theater for the Performing Arts and the 800-seat Suffolk Theater. ZEN Productions has performed at a number of conventions in New York, New Jersey, and Pennsylvania.

Each performer brings a unique background and style all her own. Goth sloth gals are comprised of:
Annie – stilt walking, trapeze dancer who embodies positivity and rainbows;
Luna – lovely, lyrical dancer and goth goddess;
Megan – strong woman, and multi-talented artist of many mediums. 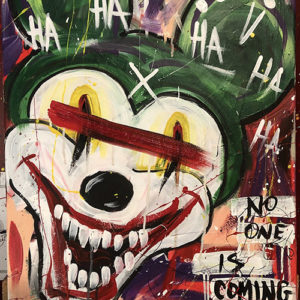 Artist Jasin Cadic’s latest collection “SHOW ME YOUR SCARS“ which includes over 20 paintings along with interactive installations will be on display all weekend at Dark side of the con this year. Jasin will also be Painting Live at the Villains Costume Ball at Dark Side of the Con Saturday Night at Midnight.