DaGeist is a french Darkwave, New Wave and electro band. Their first album entitled “40” was released in 2016 on the German label Danse Macabre Records.
Featuring analog keyboard sounds, a cold wave bass, new wave guitar sounds and sometimes an energetic, sometimes melancholic voice.
By its name, DaGeist wants to make travel “the spirit” of the one who listens to the rhythm of the compositions and to transmit the emotion lived by the band during the concerts.
With this album daGeist has travelled the dark scene in Europe including Germany, France, Belgium, Italy, England, the Netherlands, Spain and shared the stage with bands such as Trisomie 21, Lebanon Hanover, She Past Away, Clan of Xymox, Anne Clark, Covenant, Rosa Crvx, Die Krupps, DAF,and so on. DaGeist has performed in several festivals such as Wave-Gotik-Treffen, the W festival , and Les Nuits Dark Rituals among others!
With the second album SeXy, DaGeist is coming back with darker titles, with more percussion, a very cold bass and a really present voice all in a dark, romantic atmosphere that reminds us the sounds of the 80s! 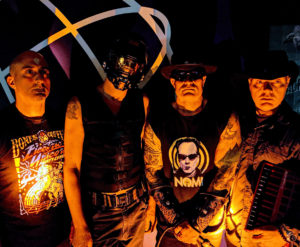 Northern New Jersey’s Chmcl Str8jckt fuse old school metal guitars with classic Wax Trax! era industrial music to bring you sinister Industrial Rock with a vintage flavor.
Releasing their self-titled debut in 2017, they quickly got many excellent reviews and airplay on countless radio stations and internet platforms. In 2018, while writing their new material, they offered up their debut tracks for remix to other international industrial artists and put out the 18 track remix release, called “RMX”. Featuring artists like Leaetherstrip and Adoration Destroyed, this also came out to rave review and much airplay.
Chmcl Str8jckt has become know for a strong, engaging live show, with dark imagery and select theatrics to enhance the disturbing themes of their songs. They have been direct support for My Life With The Thrill Kill Kult and opened for acts such as Orgy and Christian Death and Skold.
Chmcl Str8jckt has recently finished recording their new CD “WRTCHD THNGS” with John Bechdel (keyboardist of Ministry, ex-Fear Factory, ex-Killing Joke) producing….releasing in August 2019 on Cleopatra Records. 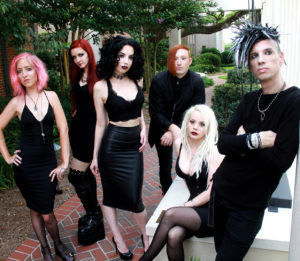 A mix of darkwave and synth-driven goth pop, Florida’s Crüxshadows became an unlikely source of optimism in a genre better known for its outright gloominess. Formed in Tallahassee by enigmatic frontman Rogue, the band (pronounced Croo-shadows) issued a self-released cassette, …Night Crawls In, in 1993 before signing with Philadelphia-based Dancing Ferret Discs, which issued their follow-up, Telemetry of a Fallen Angel, in 1997. Employing a blend of atmospheric electronics and organic elements like violin and guitar, Rogue and his frequently changing ensemble of collaborators pitted themes of hope and inner strength against a backdrop of dark-hued synth pop and dance music. Through tireless touring and recording, the Crüxshadows began to amass a wide fan base within the many diverse subcultures of the darkwave movement and, by the early 2000s, had found an eager audience in Europe. Following several increasingly successful releases, the band’s 2002 album, Wishfire, became a Top Ten hit on Germany’s Deutsche Alternative chart. Their next album, Ethernaut, arrived a year later, followed in 2004 by a remix album and later the live CD/DVD set Shadowbox. In a surprise showing back home, the Crüxshadows’ 2006 single, “Sophia,” debuted at number one on Billboard’s Hot Dance Single Sales chart and number seven on the Hot 100 Single Sales chart. The accompanying album, DreamCypher, yielded a second hit in “Birthday,” greatly expanding the band’s audience in the U.S., while at the same time they began to make inroads in Asia, playing the MIDI Festival in Beijing. Released in 2008, the Immortal EP also found success on Billboard, while the Crüxshadows’ next full-length, the mythology-inspired 2012 release As the Dark Against My Halo, became their first number one on the Deutsche Alternative chart. The Crüxshadows continued to make frequent tours of Europe while taking more selective gigs in the U.S. and appealing to their large gamer audience at the annual Dragon Con in Atlanta, Georgia. Returning in 2017, the Crüxshadows delivered the full-length Astromythology via their own Wishfire label.

The Cruxshadows will also be hosting a VIP meet & greet session where you can meet the band for all VIP ticket holders! 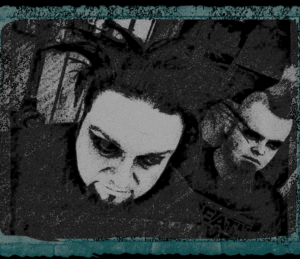 God Module is the dark electronic musical project of Jasyn Bangert with assistance from Andrew Pearson onstage and in the studio.
As underground musical trends have come and gone, God Module have stayed at the forefront of the Dark Electronic scene for the past 20 years.
Mixing harsher musical styles (Punk, Death Rock and Metal) with his love for electronic music (EBM, Industrial, Synthpop and Techno) God Module was created.
Incorporating imagery and aesthetics from his interest in the Horror genre and the Paranormal, God Module has taken on a dark persona over the years.
With numerous successful North American headlining tours and hundreds of shows around the world God Module have solidified their reputation as one of the top live performers in the Industrial genre.
God Module is current signed to Metropolis Records in North America and Infacted recordings in Europe.

Velvet Acid Christ returns with a new album Ora Oblivionis. Inspired by the idea of self destruction, this album touches on every aspect of the band’s sound, new & old. An analog feel runs through the album, wherein dance industrial, minimalist goth dance, dreamy piano soundscapes & industrial metal are all explored. Ora Oblivionis is a varied yet cohesive album, and Velvet Acid Christ’s finest work to date.

Velvet Acid Christ is Bryan Erickson and Dianna Recalde. Velvet acid christ has finished Ora Oblivionis that drops aug 9th, and fun with knives remastered that drops july 26th. They are currently working on the next LP for 2020 called “nothing”.

Ego Likeness was created in 1999 by artist Steven Archer , a DC native, and writer Donna Lynch in Baltimore, Maryland. Taking their name from Frank Herbert’s classic science fiction novel ‘Dune’, the band began as an experimental/ dark trip hop project. By 2000, the couple was moving the project in a darker electronic/ dance direction, resulting in a self-released full length album entitled ‘Dragonfly’.

Ego Likeness signed with Dancing Ferret Discs for the release of 2004’s ‘Water to the Dead’. This album featured the band’s electronic roots while exploring a bit of a heavier rock sound.

For 2010, Ego Likeness signed with Metropolis Records to release their fourth album,’Breedless’.

Often accused (though never convicted) of being one of the hardest working bands in the US scene, the duo somehow manage to find time to be prolific in other creative endeavors, with Steven’s additional music projects Hopeful Machines and Stoneburner, as well as being an accomplished painter and children’s book author, and Donna having published several novels including the acclaimed “Isabelle Burning” and “Red Horses”.

It’s star-born sounds off the starboard bow as the squamously famous level bosses of industrial Boston, THE GOTHSICLES, make their Dark Side of the Con debut!

These international implacables keep the raucousness cacophonous by marrying an irresponsible mix of high-energy darkness with 8-bit grit. Catch the electronic body magic! 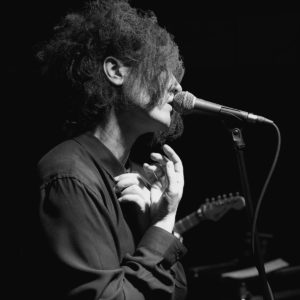 Astari Nite crosses an obscure mix between gothic rock and post-punk, exploring themes of death, love and the occult.
Having performed alongside acts such as Peter Murphy, The Damned, Psychedelic Furs, She Wants Revenge, She Past Away, Cold Cave, Vowws, Das Ich, Black Rebel Motorcycle Club, Modern English, and Bestial Mouths they have established themselves as contemporaries of the post-punk / gothic rock scene.

Methodical is a six-member metal industrial band originating out of New Jersey.
Mission Statement:
As a band, the members will remain focused, diligent, and methodical on the presentation of their message. Methodical will equally be recognized for its musical successes and its humanitarian accomplishments.
Purpose, Principles, and Goals:
Methodical was created to take a position against abuse (mainly child abuse) and bring awareness to suicide through artistic and positive forums. As a whole, the band has experienced mental, physical, and sexual abuse(s). While many victims of abuse become fatalities of the experience and continue the vicious cycle, Methodical has chosen to end it. The band will participate with charities that share its purposes, principles, and goals. With one song, one show, and one stance at a time, Methodical will pursue the opposition of abuse and suicide consistently, and not only when it is fashionable. The foundation of the band is its belief that (in place of crumbling), one can ascertain strength from a life’s events that are designed to hurt you and be stronger because of it.
“We are Methodical, we will take a stand together, united, and we will remain who we are.”

In 2015, Lee Lauer of Aslan Faction approached Jim Semonik (Electronic Saviors/Rein[Forced]) at a KMFDM show. Jim’s band, Rein[Forced], was opening the gig. They became fast friends and share a mutual love of industrial music. Lee approached Jim about working on a project and thus Red Lokust was born.

Their debut album “The Repercussions of Shedding Your Skin” is a relentless assault on the mind as well as the dance floor. Dealing with subjects of personal change, selfishness, paranoia and different points of view, “Repercussions” is a solid album through and through and includes the singles “When We Knew You”, “Judgement Chamber” and “Mistakes Were Made”. Their first track, “Speechless”, appeared on the high profile Electronic Saviors 4 compilation in June 2016. The album also includes bonus remixes by Leaether Strip and Interface, was mastered by Reza Udhin of Inertia and Killing Joke, and stunning artwork by Byron Winton.

New material started filtering out in 2018 with a brand new track “I’m Not Here” on Electronic Saviors 5 another one “Letter From Grindcore” on the Respect the Prime:Constructed Cold EP. On said EP is also a collab with New Jersey’s Panic Lift called “Constructed Cold”. It was an intense club smasher that took dancefloors by storm. In 2019, Red Lokust is currently writing the follow up album “Whom the Gods Wish to Ruin, They First Drive Mad” which is due in Spring 2020. There will also be more new material on the upcoming Electronic Saviors 6:Reflection compilation in Summer 2020.