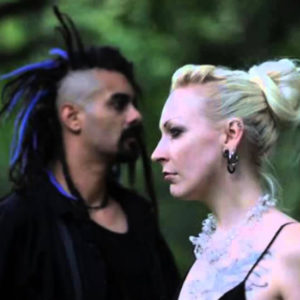 Ego Likeness was created in 1999 by artist Steven Archer , a DC native, and writer Donna Lynch in Baltimore, Maryland. Taking their name from Frank Herbert’s classic science fiction novel ‘Dune’, the band began as an experimental/ dark trip hop project. By 2000, the couple was moving the project in a darker electronic/ dance direction, resulting in a self-released full length album entitled ‘Dragonfly’.

Ego Likeness signed with Dancing Ferret Discs for the release of 2004’s ‘Water to the Dead’. This album featured the band’s electronic roots while exploring a bit of a heavier rock sound.

For 2010, Ego Likeness signed with Metropolis Records to release their fourth album,’Breedless’.

Often accused (though never convicted) of being one of the hardest working bands in the US scene, the duo somehow manage to find time to be prolific in other creative endeavors, with Steven’s additional music projects Hopeful Machines and Stoneburner, as well as being an accomplished painter and children’s book author, and Donna having published several novels including the acclaimed “Isabelle Burning” and “Red Horses”.