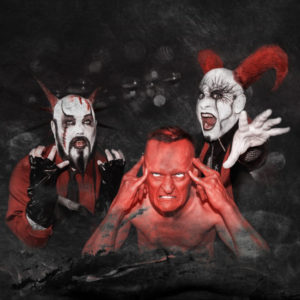 As at the end of 1980’s Bruno Kramm and Stefan Ackermann, were sending their first religion-criticising demotapes they could not even imagine that this specific release would be soon defining a whole new music genre, “Neue Deutsche Todeskunst” (“new german death art”). Songs like “Gottes Tod” and “Des Satans neue Kleider”, that are still in this new century carrying a very special magic in them, became well known hymns of the black scene in the new freshly united Germany.
Since their early works “Satanische Verse” and the album “Die Propheten”, Das Ich has been combining drama with music, expressionism with classics and electronics with gothic with the intensity so far unexperienced in the music scene. They were crossing boundaries and inspiring numerous bands and forms of expression with their new art.
On their extended worldwide tours in Europe, USA, South-America, Asia, Israel and Russia, Das Ich was not only strongly promoting the culture of a new and expressive but at the same time still well beware of it’s horrifying past Germany. They also helped their mother tongue, German, to finally emancipate from Schlager, folk music and Krautrock. Between their albums “Staub”, “Egodram”, “Lava”, “Antichrist” and “Cabaret”, Stefan Ackermann and Bruno Kramm have always allowed long periods for the inspiration being able to develop their own musical language that has always been responsing to every epoch and period of time.
With their boundary-crossing, controversial and intense live shows Das Ich has developed a strong and very unique reputation that is still, over 25 years after the release of “Gottes Tod”, not comparable with any other band. Together with the metal band Atrocity, they broke through the almost impenetrable scene boundaries between metal and gothic scenes by wrapping the poet Gottfried Benn with their “Morgue” vocalization into a disturbing sound picture, which in its time-critical presentation found the premiere in the prestigious Theater of Zürich.
Still until today “everblacks” like “Kain und Abel”, “Von der Armut” or the technoide VNV Nation remix version of “Destillat” are constantly accompanying dance-floors at the worldwide Gothic parties.
After very serious illness of the singer Stefan Ackermann and the political excursion of the composer Bruno Kramm, Das Ich is now retuning stronger than ever with a new line-up and is working on a soon to be released new album.