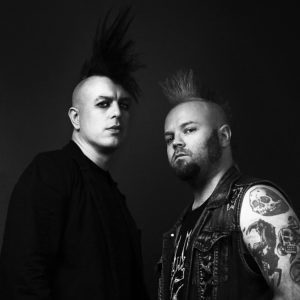 In the late 1990s Bella Morte played an essential role in the revival of Gothic Rock in the US. The band self-released two albums and toured tirelessly carrying their sound across the US, Canada, Germany, Austria, and Britain. As a result of their growing popularity, the band signed with Cleopatra records who would re-release the now-classic Where Shadows Lie. The band would not remain with Cleopatra long, as strong sales led them to Metropolis Records, where they have released 9 full length albums and 2 EPs. In 2013 Metropolis Records released The Best Of Bella Morte (1996-2012) celebrating the first 17 years of their dark, diverse catalogue of sounds.

The members of Bella Morte are known for their love of all things horror. Classically-trained singer Andy Deane has written and published 4 horror novels (The Sticks – 2009), (The Third House – 2010), (All the Darkness in the World – 2011), (No Turning Back – 2012). Andy composed the score for the 2014 film “Plan 9” (Darkstone Entertainment), a remake of the Ed Wood classic Plan 9 From Outer Space. Bella Morte also contributed 3 songs that appear in the film. In 2010 Bella Morte teamed up with Troma Entertainment to shoot a video for their song In The Dirt. Footage for the video was shot by Lloyd Kaufman at DragonCon and Connooga earlier that year. The band has continued to work with Troma and recently composed the theme song for Return To Nuke Em High. Bella Morte has also had the pleasure of working with co-stars from The Hunger Games: Mockingjay – Part 2 for their 2015 video of Exorcisms.
In August of 2017 Bella Morte released their latest work Year Of The Ghost, which dives back into the band’s early post-punk, cold wave and gothic sounds. As the band continues to tour the world and write new material, they remain eternally thankful to be doing what they love: singing songs about the dead and winning the hearts of the living along the way.