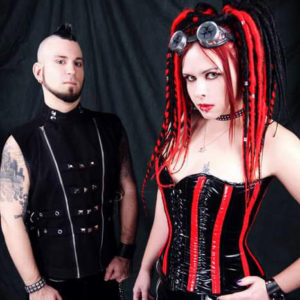 00tz 00tz is an industrial dark electronica project which was created by then sole member Nicky Phoenix. Nicky Phoenix who was a veteran musician of the New York metal/industrial scene began 00tz 00tz as a instrumental project in 2008. First featured on the the release of 00tz 00tz’s second Album “Frequency Damage” in 2010, vocalist Krysta Veronica Button began to lend her agressive voice and lyrics to the overall sound of 00tz 00tz. Over the past eleven years 00tz 00tz has released 6 albums and perfomed numerous times throughout the United States. Often performing in support of well known acts across the industrial/ebm/goth/sythpop scene, 00tz 00tz always delivers electric high energy performances which are not to be missed.